Every new Erstwilder release brings with it a huge sense of excitement, but their latest South American Socialites range is extra special for me because they asked @cmjsnz and I to shoot the whole collection! It has been such an honour to put everything together, and as the new release has a whopping twelve pieces I’m starting off by sharing six in this blog post. South American Socialites takes some heavily requested and favourite animals from the American subcontinent, rendering them in a mixture of full bright colour and glitter, and adding some quirky accessories! See how I’ve styled them, along with some fun Latin animalia facts, below!

It’s hard to choose a favourite, but Rita the Anteater is definitely a special member of the bunch in my eyes. I love her glittery fur in all different shades of pink, and her sweet soft eyelashes behind her chic cat-eye glasses! Did you know that anteaters can be as small as a squirrel or up to 7 feet long? They also never destroy ant hills, so they can go back for another snack later when it’s ‘refilled’! 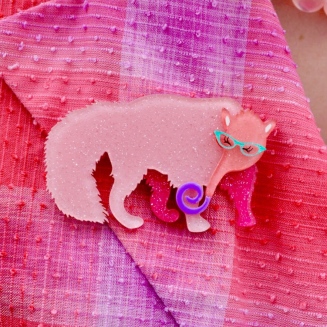 Sybil the Sloth is ready to hang out! She’s found the perfect branch to swing from, and it even matches her hair (fur?) bow. Her fur is golden and shimmery, and she has the sweetest face! A sloth’s fur has a whole other world living in it, as its unique thickness is a great place for everything from beetles to camouflaging algae, and its slow movement gives this wildlife ample chance to hang on! 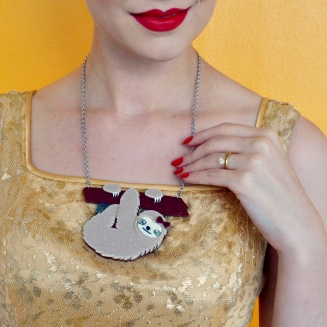 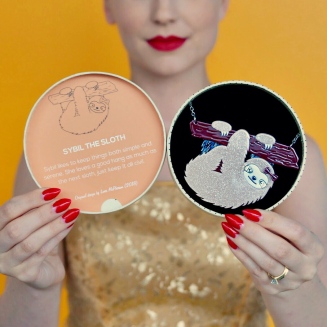 The most dapper fish award (if it existed) would surely go to Pedro the Piranha! He’s surely the suavest fish in the sea with that snazzy bowler hat and ruby-encrusted tooth. Pedro is such a brilliant shade of carefully detailed turquoise, while his grey-patterned jaw is a great contrast. Piranhas have been swimming around South American lakes and rivers for millions of years, often in packs of up to 1000! 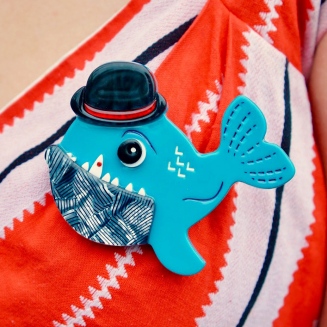 Theodore the Tamarin looks like he’s been shopping with Pedro, because his top hat and monocle are equally debonair! He is a gorgeous bold purple colour, and perched atop a bright blue log made of marbled resin. Turns out there are a whole lot of tamarin species, but Theodore’s luxuriant moustache gives him away as a tamarin of the Emperor variety. They were named such due to their remarkable resemblance to German emperor Wilhelm II, or rather his moustache! 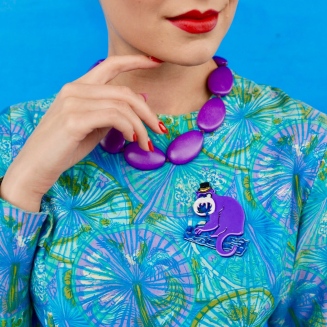 Looking for the perfect companion for your next date? Meet Alan the Alpaca! He’s all dressed up in his glasses and stripey tie, and ready to compliment you the way you deserve. I adore how his coat of marbled pink resin looks like it has a kind of fluffy texture, like real alpaca fur! The most common noise you’ll hear coming from an alpaca is humming; they’ll hum almost anytime, whether they’re curious, fearful, or content. No reports yet though as to whether they hum in tune! 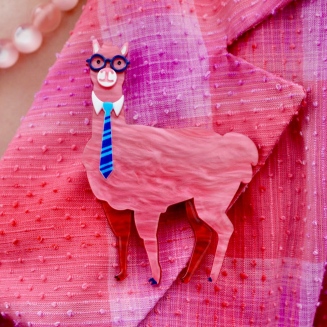 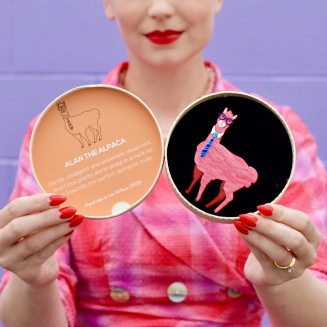 Because why have one sloth brooch when you can have two? The Slothertons are here to make sure the other never gets lonely, and together they make such a stylish pair! Mrs Slotherton has her best hat on, while Mr Slotherton is rocking a bow tie. And like Sybil, their fur is also glittery! I’ve popped them next to each other on my dress, but they’d also make for adorable collar clips. And one last sloth fact: it’s thought that some now-extinct varieties of sloth used to be as large as elephants! 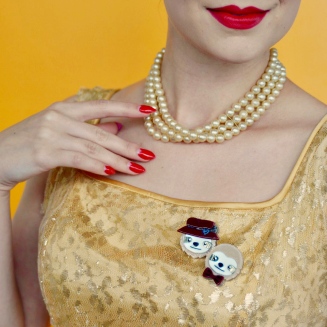 A massive thank you and oodles of gratefulness to the Erstwilder team for having such faith in us to shoot the whole range, it’s been such a pleasure! This is only half of them, so look out for part two coming very soon. And of course thank you to @cmjsnz for capturing the amazing-ness of these pieces! Let me know which ones you love most (and maybe even bought) in the comments!