This is a post I’ve been meaning to write for a while, about my (belated) highlight of 2015, and FINALLY I have gotten around to writing it all down! While there were a few highlights last year, my main one was that over August/September I spent four weeks travelling  around London and Paris via Shanghai and Singapore. Having not travelled much before this was a really big deal for me!

My first stop was Shanghai where I had an 18 hour stopover. This seemed like a good idea when I booked it as I knew it would give me plenty of time to explore (and the alternative was a one hour stopover which made me anxious!), however I didn’t have much of a plan as to what to do and I didn’t realise how exhausted I’d be already! It was so hot and humid when I arrived as I was still in my New Zealand winter clothes, but I soon got changed and found a place to store my bags. I then purchased a train ticket and made my way into the shopping area in Nanjing Road. I browsed through lots of department stores and even found Sephora, though I decided to save buying anything there until I got to Paris. It was starting to rain quite heavily after a few hours though so I went back to the airport and found a short-stay hotel to shower and sleep in. Then I had a few hours to wait until I was on my next flight!

My next flight was to Paris where I then had to make my way from the airport to Gare du Nord station to catch the Eurorail to London. I chose to go straight to London because that worked best for accomodation, but it meant around 50 hours of travelling to get there! However, I found the Eurorail so easy and comfortable (and even managed to sleep!) and was soon at Kings Cross station in London. I then caught a black cab to my accomodation, which was about 10 minutes away at Schafer House, part of the University College of London student housing.

The sights and getting around:

Aside from taking a cab to my accomodation, I spent the rest of my time in London taking public transport around the city. The tube was amazing; we don’t have anything close to that in New Zealand and I couldn’t believe how efficient it was! I tried to allow myself time most days to take at least one trip on the bus as I felt this gave me a better idea of the sights. And of course, I spent a lot of time walking! I refused to bring flats with me and instead brought four pairs of ‘comfy’ heels which I cycled through and got around in. I often tried to get off the bus or tube a stop early so that I could get more walking in, or would plan a few things to do in the same area in a day so I could explore it on foot. This was another thing that was a real novelty to me – everything was so flat, which is not the case in Auckland! I also went on a couple of walking tours related to Harry Potter and the Beatles which were really interesting, and the latter even took me to Abbey Road!

I knew the shopping in London would be amazing and I was right! I especially couldn’t wait to get to the markets and tried to engineer it so I went to them on the day they had their ‘vintage day’, where more vintage sellers were likely to be in attendance. I walked round the Stables and Chalk Farm markets in the rain, the Portobello Road markets in the blazing sunshine, as well as Old Spitalfields, Brick Lane, and the Greenwich On the Gardens vintage fair. I also managed to be there at the right time for the Mid Century Market held at Cecil Sharp House, which was so much fun; it was lovely to see so many vintage ladies in one place, and so many beautiful vintage pieces for sale! I paid a visit to Vivien of Holloway (for the ultimate petticoat), two Collectif stores, and made my way round Carnaby Street and a number of vintage stores in Soho and Covent Garden. With the exchange rate being so bad I had to pass on some things that were out of my price range, but I did still get enough new-to-me things for my wardrobe that my bag was slapped with a ‘heavy’ label on the way home!

I got round so many galleries in London that I felt very educated by the time I left! I had looked online at the major galleries to see which exhibitions were on before I left New Zealand, and it turned out there were lots that were fashion-oriented on while I was there. I got to see the Audrey Hepburn exhibition at the National Portrait Gallery, 200o years of shoes at the Victoria and Albert, the evolution of swimwear at the Fashion & Textile museum, and the Fashion on the Ration exhibit at the Imperial War Museum. I also made sure to see the largest Elvis exhibition in Europe at the O2 arena, and went to the National Gallery, the Globe exhibition, and the Tate Modern. And I of course visited Buckingham Palace on the day that Queen Elizabeth became the longest reigning British monarch – this meant it was really busy, but that I also got to see a lovely photo exhibition documenting her life. The wonderful thing about all of these places is that, being on holiday, I had time to read all of the information that went along with the exhibitions, and so I learnt a lot while seeing all these amazing things! The National Portrait Gallery was my favourite for this because each portrait had cards next to it with information about the artist AND the sitter. So much fun!

Three shows at the Globe: As You Like It, Measure for Measure, and Much Ado About Nothing; The 39 Steps; Bend It Like Beckham; The Commitments; Sunny Afternoon; Jersey Boys; Let It Be

I knew I couldn’t tire myself out too much during the days because I had a long list of shows I wanted to see in London. I have been involved in every aspect of theatre for over 14 years, and I especially love musicals and Shakespeare – so I was in the right place! I was lucky enough to see three plays at the Globe: As You Like It, Measure for Measure, and Much Ado About Nothing, all of which I have performed in myself (half of my pin-up name I even took from playing Hero a few years ago), so I was excited to actually get to watch them! I also got to see 15 musicals, many of which I’d been desparate to see for years but that had never toured in New Zealand. I was so impressed with all of them (and would happily watch any of them again!) but my favourites would have to be Matilda, Billy Elliot, and Kinky Boots. As a huge theatre nerd I really enjoyed getting to see all the old theatres as well, they are beautiful! 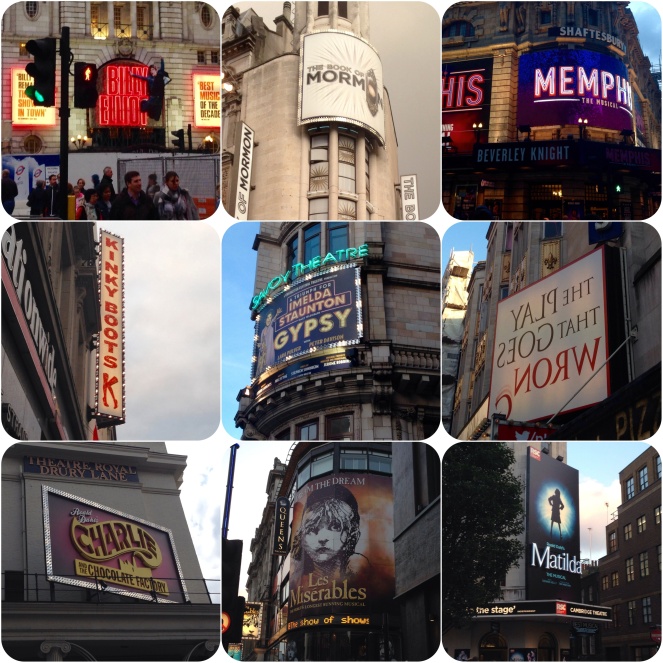 After three weeks in London I headed back to Paris on the Eurorail. I did struggle a little because this time ALL the escalators seemed to be broken down and my bags were even heavier due to all the things I bought in London. However there were luckily a few strong men who took pity on a girl in petticoat and heels trying to heave her bags around!

Unfortunately it rained most of the time I was in Paris, but that didn’t stop me from getting out and seeing the sights. I was staying in the hotel part of the Universitaire Lanteri, which was about a 20-30 minute metro ride from the city centre.

I got round the Musee d’Orsay and the Louvre, and while I enjoyed the latter I would have to pick the d’Orsay as my favourite – I most enjoy looking at paintings which the gallery was mostly made up of, and I found it so much easier to navigate and more manageable to get round in one day!

On the sunniest day I made sure to use this for maximum outside time – walking round Montmatre. I started on the East side of the Montmatre triangle, stopping to browse through Mamie and its sister store Mamie Blue, which have a host of amazing vintage pieces. I then went up to the Sacre Coeur, and then back down via the Salvador Dali museum (really interesting) and past the Moulin Rouge and Cafe des Deux Moulins (where Amelie worked in the film). I still walked through the rain on the other days though, making sure to walk along the Seine and past the Eiffel tower, and through some markets where a man tried to marry me off to his son running the fish stall (luckily I still retained enough of my high school French to politely decline!). And of course I took a trip down the Champs Elysees. I was so excited (my heart might have raced a little) to shop in Sephora! And when I say I shopped, I REALLY shopped. I bought mostly Sephora brand items, probably enough to last me for a very long time, but I’ve fallen in love with so many of their products so it’s a relief that they’re shipping to New Zealand now!

After four weeks I was ready, but also not ready (because who wants to finish their holidays?), to come home. I flew back via Singapore with another 18 hour stopover, but luckily Singapore has a much nicer airport than Shanghai and there was plenty to amuse myself with while I waited. I used the short stay airport hotel for a shower and double breakfast, watched a couple of movies in their cinema, and of course went to the butterfly garden! Then soon enough I was back in New Zealand, greeted by my mum who was VERY excited to have me back home.

Phew! This was a long blog post but it feels good to get it all down! I can’t wait to travel again. Do you have any big trips planned for 2016? I’d love to hear about them in the comments!

One thought on “Miss Hero Holliday on her holidays: London & Paris”